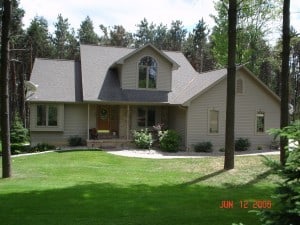 “It is perfect! But can we afford it?”

Our hearts raced as my husband and I stood in the driveway at what we thought was our dream home. A custom-built, two-story home with a whirlpool, a central vacuum system, gorgeous woodwork and a stunning 21-foot stone fireplace in the mammoth living room that had a cathedral ceiling. Best of all, it was nestled in nearly 8 acres of woods with a pond and a creek that ran along the back of the property. The owners told of the wildlife that bravely came right up to the breath-taking backyard deck; deer, wild turkey and pheasant. 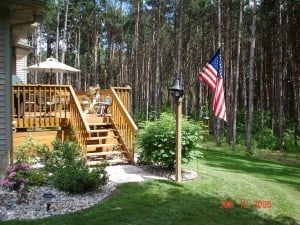 “This is it!” we reasoned. “A perfect place to finish raising our kids and retire.” We knew the boys would love the on-sight hunting in their backyard and Kenzie would be delighted to have her own room with a bathroom next door. 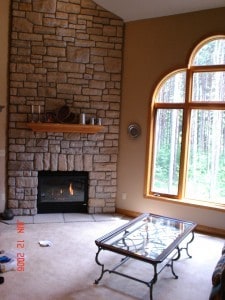 You see, we had never been a family that “kept up with the Joneses” Oh no, quite the opposite! Due to my husband being in the ministry and then spending a few years working for a local resale appliance and furniture shop, we lived very frugally. We had five people dwelling in a barely 1,000 square-foot home for many years. Our kids were nursed and wore cloth diapers. There wasn’t money for formula or disposables, even if we wanted them! We shopped at second-hand stores and garage sales. And , we were the last in our circle of friends to own a dvd player and a cell phone–(we still just have a little pre-paid phone we use only for emergencies!)

Yep, Mr. & Mrs. Jones were waaaay ahead of us in life.

Then, my husband landed a job at General Motors. For the first time in our lives, we had a good wage and health benefits. (Until then, we either went without insurance or purchased our own basic policy with $1,000 deductible per person.)

So, when he began making Cadillacs, things eased up for us. Although the first 5 years were bump and go with several short-term layoffs, soon we were making enough money to purchase a really nice home. So, we went to the bank. They told us not only that we could afford the home we had our eye on, but that we could afford to spend even $50,000 more, if we wanted to.

So, after praying and seeking opinions from godly people, we dove in. As the process unfolded, we prayed that if we weren’t supposed to live there, it would all fall through. Each time we asked God to shut the door, it seemed He kicked it even wider open for us! The owners threw in many items to the deal; a new snow-blower, an air-hockey table, furniture and two deer blinds for hunting.

The big test would come when we stuck a for sale by owner sign in our yard and tried to sell our home. We prayed that if this new dream house wasn’t for us, then our home wouldn’t sell.

It sold in three days. At nearly full price.

So, it was full steam ahead. Friends and family were thrilled for us. And I must say, I felt it was God’s reward. Especially to my husband.

You see, the man has the gift of giving. Sometimes until it scares me!!! I only tell you this because I am wired very differently. He insists we tithe off of our gross income. (Hey, net would be fine in my book. You don’t actually see all those dollars Uncle Sam takes away each week!) He has been known to buy appliances at a good deal through his connections and then “sell” them to a needy family for a fourth of what he paid. Often he will hear about a construction worker/father who is having trouble making ends meet in our Michigan economy. “Send them a $100 gift card from the grocery store anonymously” he’ll instruct me. Why, once he sold our mini-van (my favorite mini-van) to a family for 1/3 of the blue book price. And after we had people interested at full price!!!!!

So, in my mind, I thought this dream home was long overdue. And it was a reward for my giving, others-centered husband and our “We-can-do-without-an-XBox 360” kids.

However, it didn’t take long for us to see our dream home turn into a nightmare.

We moved in in January of 2006. The propane costs to heat that place were waaay more than expected. It was located 15 minutes north of our small town. And even further away from the capital town of Lansing where Todd works. That meant lots of gasoline. Gasoline that doubled in price soon after we moved in!

And while we were able to make our mortgage and bills on time, it was by the skin of our teeth! We have become convinced that banks do not take into account that a family tithes. Our budget was so tight, it squeaked!!!! Seriously, here we lived in a house that was amongst the nicest in our area and, when my dishwasher broke, we had to save for four months in order to pay the $100 to get it fixed!!! Yes, we could afford the home, but just barely.

But what was worst of all was the fact that we could no longer afford to be generous.

When we’d hear of a missionary who needed extra money for a project or necessity, we had to pass. When we wanted to give an extra bag of groceries to the local food pantry, we couldn’t. When Todd’s sister went through and awful and unwanted divorce that ruined her financially, we couldn’t help in the way we wanted. No more anonymous gift orders from my hubby; a man who grew more down with each passing day as the stress level mounted. Not only the stress of paying the bills, but of keeping up that big place and the yard and woods, especially when a wind or ice storm fell some of the trees.

In fact, after living there just 5 months, Todd lost 90% of his hair almost overnight. Medical tests proved it was nothing serious. It was probably due to stress. So, we made the tough decision to put our dream home on the market. The sign went up in May on Memorial Day 2006.

Yes, it took two long years of living on a shoestring to finally sell that home. Oh, and since the housing market had taken a nosedive just weeks after we originally bought it, we had to sell it for ….gulp……$65,000 less than we paid for it!!!

But we obeyed what we felt to be the voice of the Lord moving us to a smaller home in a subdivision near town. Our expenses dropped by $500 a month.

Now, I thank God for the prompting. For it looks as if, bailout or no bailout, Todd will lose his job in January. While I know it will still be tough to find another one in Michigan, and we really don’t want to move our kids again, we are thankful that at least the mortgage here is smaller and our gas and heating costs are less.

The moral of the story? I’m still trying to figure that one out. We have talked for many hours with our kids and have come up with a few lessons learned.

First of all, be careful what you wish for. Your dream may turn into a nightmare. And sometimes God gives you what you think you so desperately want just to show you it wasn’t what you really wanted in the first place.

Second, a dream house is not worth it if it robs your dream of helping God’s people who are in need. It is waaay more fun to spend your money on others than on yourself!!!

Third, in our “I-can-do-it-even-if-I-have-to-max-out-six-credit-cards-and-take-twenty-years-to-pay-them-off-society” a family who refuses to have any debt besides their home and live within their means is a rarity. Neighbors, strangers, people at Todd’s work, why even Christians thought we were nuts to put our house on the market after such a short time. They all said, just use credit cards until things turn around. Or Karen can just work full-time instead of being home with the kids. Then you can have the big house. Sorry, we choose mom at home over a big house. (Now, I know many moms of small children have to be in the workforce to help afford even a little house. That is a given!!! In fact, if Todd doesn’t land a new job soon, I’ll be one of them!!!)

I tell my story to encourage you to realize that, although living in an awesome, big house seems glamorous and exciting, it is not worth it if it stretches your budget and your nerves (and your marriage!!!) to the limits. Now we aim for adequate. And we realize that some of the sweetest times we’ve had as a family, came in that little old starter home with all five of us stepping over each other!!

We have decided that it is better to be a family who lives simply, so others may simply live.

P.S. When you hear of the auto talks on the news, will you pray for us? Pray that Todd finds a new job in the Mid-Michigan area. And pray that I don’t let the spending freeze we’ve enacted put a damper on Christmas. God is giving me some great, low-cost ideas I think the kids will love. And pray for God to calm my anxious heart. I just want to trust and rest instead of fret and worry. (Both of which I am an Olympic champion at!!!)

What worldly behavior is sometimes hard for believ

Tell us about a time you got really close to somet

Have you ever caught yourself doing or saying some

Do you have someone in your life that wants to go

What promise of God is ready and waiting in your "

Tell us about a time Jesus heard you speak an unsp